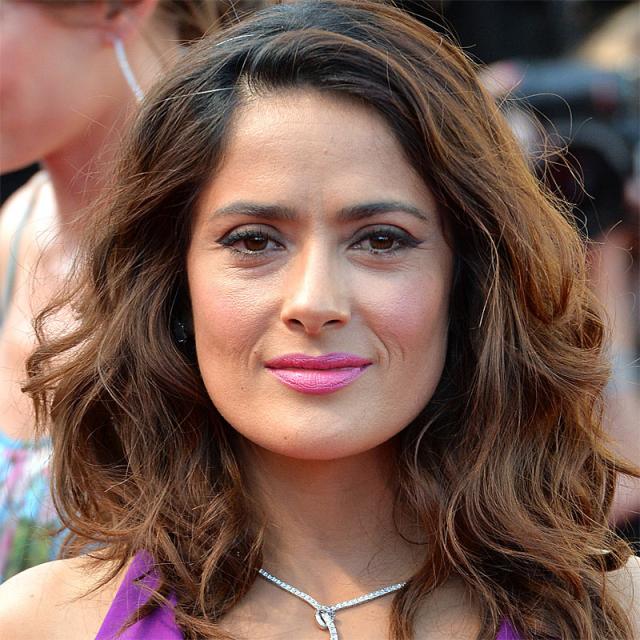 One of Hollywood's most dazzling leading actresses, Salma Hayek was born on September 2, 1966, in the oil boomtown of Coatzacoalcos, Mexico. Hayek has freely admitted that she and her brother, Sami, were spoiled rotten by her well-to-do businessman father, Sami Hayek Dominguez, and her opera-singing mother, Diana Jiménez Medina. Her father is of Lebanese descent and her mother is of Mexican/Spanish ancestry. After having seen Willy Wonka & the Chocolate Factory (1971) in a local movie theatre, Salma decided she wanted to become an actress. At 12, she was sent to the Academy of the Sacred Heart in New Orleans, Louisiana, where she pulled pranks on the nuns by setting their clocks back three hours. She was soon expelled. Only after attending Mexico City's Universidad Iberoamericana did she feel ready to pursue acting seriously. She soon landed the title role in Teresa (1989), a hugely successful soap opera which earned her the star status in her native Mexico. However, anxious to make films and to explore her talent and passion, Hayek left both Teresa (1989) and Mexico in 1991. Heartbroken fans spread rumors that she was having a secret affair with Mexico's president and left to escape his wife's wrath. At long last, Salma made her way to Los Angeles. The 24 year old actress approached Hollywood with naïve enthusiasm, and quickly learned that Latin actresses were, if at all, typecast as the mistress maid or local prostitute. By late 1992, Hayek had landed only bit parts. She appeared on Street Justice (1991), The Sinbad Show (1993), Nurses (1991), and as a sexy maid on the HBO series Dream On (1990). She also had one line in the Allison Anders film Mi vida loca (1993). Feeling under-appreciated by Anglo filmmakers, Hayek vented her frustrations on comedian Paul Rodriguez's late-night Spanish-language talk show in 1992. Robert Rodriguez and his producer wife Elizabeth Avellan happened to be watching and were immediately smitten with the intelligent, opinionated young woman. He soon gave her her big break--to star opposite Antonio Banderas in the now cult classic Desperado (1995), which put her on Hollywood's map. The moviegoers proved to be as dazzled with Hayek as he had been. After her break, she was cast again by Rodriguez to star in his From Dusk Till Dawn (1996). Although her vampy role opposite George Clooney and Quentin Tarantino was a small one, it was a good credit to her box office name. Hayek's first star billing came later that year with Fools Rush In (1997) opposite Friends (1994) actor Matthew Perry. The film was a modest hit, and Hayek continued to rise her star in both commercial and artistic films such as: Breaking Up (1997) with an unknown Russell Crowe; 54 (1998) about the rise and fall of the legendary New York club; Dogma (1999), playing the muse in a somewhat odd comedy co-starring Matt Damon and Chris Rock; In the Time of the Butterflies (2001), the small artistic film which won Hayek an ALMA award as best actress; and the 1999 summer blockbuster Wild Wild West (1999). Her production company "Ventanarosa" produced the 1999 Mexican feature film No One Writes to the Colonel (1999), which was shown at the Cannes Film Festival and selected as Mexico's official Oscar entry for best foreign film. The new millennium started out quietly around Salma as she was preparing to produce and star in her dream role, that of Frida Kahlo, the legendary Mexican painter whom Salma had been admiring her entire life and whose story she wanted to bring to the big screen ever since her arrival in Hollywood. It finally happened in 2002. Frida (2002), co-produced by Hayek, was a beautifully made film overflowing with passion and enthusiasm, with terrific performances from Salma and Alfred Molina as Kahlo's cheating husband "Diego Rivera". On the side was an entourage of stars including Antonio Banderas, Ashley Judd, Geoffrey Rush, Edward Norton and Valeria Golino. The picture was a hit and was nominated for six Oscars, including best actress for Hayek, and won the awards for make-up and its brilliant original score by Elliot Goldenthal. Hayek established herself as the serious actress that she is and, in the same year, expanded her horizons, directing The Maldonado Miracle (2003), which was shown at the Sundance Film festival. In 2003, she starred in the final of Rodriguez's "Desperado" trilogy Once Upon a Time in Mexico (2003), again opposite Banderas, and has just finished After the Sunset (2004) opposite Pierce Brosnan and Ask the Dust (2006) opposite Colin Farrell. Both are scheduled for release in early 2005. In the works are Robert Altman's "Paint" and Bandidas (2006) in which she will star with her friend Penélope Cruz.