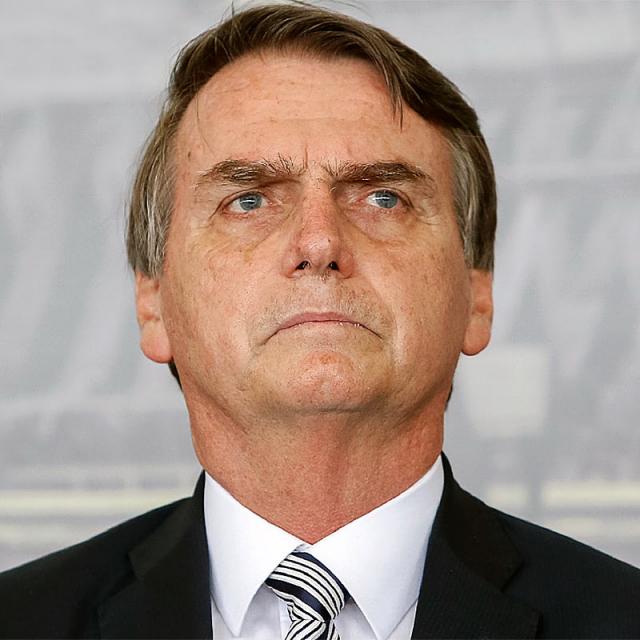 Jair Messias Bolsonaro is a Brazilian politician and retired military officer who is the 38th president of Brazil. Elected in 2018 as a member of the conservative Social Liberal Party before cutting ties with them, he has been in office since 1 January 2019. He previously served in the country's Chamber of Deputies, representing the state of Rio de Janeiro between 1991 and 2018. Bolsonaro was born in the town of Glicério, in the state of São Paulo. He graduated from the Agulhas Negras Military Academy in 1977 and served in the Brazilian Army's field artillery and parachutist units. He became known to the public in 1986, when he wrote an article for Veja magazine criticizing low wages for military officers, after which he was arrested and detained for fifteen days. One year later, he was accused by the same magazine of planning to plant bombs in military units, which he denied. After a first degree conviction, he was acquitted by the Brazilian Supreme Military Court in 1988. He moved to the reserve in 1988 with the rank of captain and ran for the Rio de Janeiro City Council that same year, being elected while a member of the Christian Democratic Party. Bolsonaro was elected in 1990 to the lower chamber of Congress and was subsequently re-elected six times. During his 27-year tenure as a congressman, he became known for his strong support of national conservatism. He is a vocal opponent of same-sex marriage and homosexuality, abortion, affirmative action, drug liberalization and secularism. In foreign policy, he has advocated closer relations to the United States and Israel. During the 2018 presidential campaign, he started to advocate for economic liberal and pro-market policies. A polarizing and controversial politician, his views and comments, which have been described as far-right and populist in nature, have drawn both praise and criticism in Brazil. Bolsonaro announced his intention to run for president in March 2016 as a member of the Social Christian Party. However, he left the party in 2018 and joined the Social Liberal Party, and then launched his presidential campaign in August of that same year, with retired general Hamilton Mourão as his running mate. He portrayed himself as an outsider and a supporter of family values. He came in first place in the first round of the general election on 7 October 2018, with Workers' Party candidate Fernando Haddad coming in second place. The two candidates faced a run-off on 28 October 2018, and Bolsonaro was elected with 55.1% of the popular vote. Bolsonaro placed many army officers in key positions in his cabinet. Prior to his inauguration, Bolsonaro stated that he would fill positions in his government based only on technical qualifications and skills rather than ideological sympathy. Despite this, during his presidency, many appointees saw themselves clashing ideologically with the government. His minister of Justice, Education, the Secretary of Government, and the Postmaster General, among others, end up falling out of favor with the president. Bolsonaro focused on domestic affairs in his first months in office, dealing primarily with the fallout of 2014 Brazilian economic crisis. In his first year in office, the economy did recover, albeit slowly, while crime rates fell sharply. Multiple controversies marked the first years of his administration. In 2019, Bolsonaro left his party amid a confrontation with other members, and formed his own political organization. During his presidency, he rolled back protections for indigenous groups in the Amazon rainforest and facilitated its destruction through deforestation. Bolsonaro's response to the COVID-19 pandemic in Brazil was criticized across the political spectrum; he sought to downplay the pandemic and its effects, opposed quarantine measures, and fired two health ministers, while the death toll increased rapidly. As a result, public opinion, which had been favourable towards him during his first year in office, turned negative throughout most of 2020, before becoming more favourable once again after he authorised emergency financial aid payments.