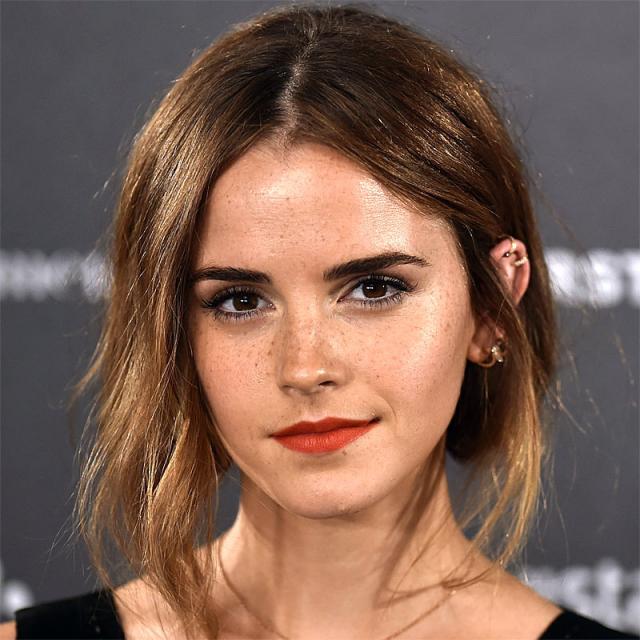 Emma Charlotte Duerre Watson was born in Paris, France, to English parents, Jacqueline Luesby and Chris Watson, both lawyers. She moved to Oxfordshire when she was five, where she attended the Dragon School. From the age of six, Emma knew that she wanted to be an actress and, for a number of years, she trained at the Oxford branch of Stagecoach Theatre Arts, a part-time theatre school where she studied singing, dancing and acting. By the age of ten, she had performed and taken the lead in various Stagecoach productions and school plays. In 1999, casting began for Harry Potter and the Sorcerers (2001), the film adaptation of British author J.K. Rowling's bestselling novel. Casting agents found Emma through her Oxford theatre teacher. After eight consistent auditions, producer David Heyman told Emma and fellow applicants, Daniel Radcliffe and Rupert Grint, that they had been cast for the roles of the three leads, Hermione Granger, Harry Potter and Ron Weasley. The release of Harry Potter and the Sorcerer's Stone (2001) was Emma's cinematic screen debut. The film broke records for opening-day sales and opening-weekend takings and was the highest-grossing film of 2001. Critics praised the film and the performances of the three leading young actors. The highly distributed British newspaper, 'The Daily Telegraph', called her performance "admirable". Later, Emma was nominated for five awards for her performance in the film, winning the Young Artist Award for Leading Young Actress in a Feature Film. After the release of the first film of the highly successful franchise, Emma became one of the most well-known actresses in the world. She continued to play the role of Hermione Granger for nearly ten years, in all of the following Harry Potter films: Harry Potter and the Sorcerer's Stone (2001), Harry Potter and the Chamber of Secrets (2002), Harry Potter and the Prisoner of Azkaban (2004), Harry Potter and the Goblet of Fire (2005), Harry Potter and the Order of the Phoenix (2007), Harry Potter and the Half-Blood Prince (2009), Harry Potter and the Deathly Hallows: Part 1 (2010), and Harry Potter and the Deathly Hallows: Part 2 (2011). Emma acquired two Critics' Choice Award nominations from the Broadcast Film Critics Association for her work in Harry Potter And The Prisoner Of Azkaban and Harry Potter And The Goblet Of Fire. The completion of the seventh and eight movies saw Emma receive nominations in 2011 for a Nickelodeon Kids' Choice Award, and for Best Actress at the Jameson Empire Awards. The Harry Potter franchise won the BAFTA for Outstanding British Contribution to Cinema in February 2011.
2011 saw Emma in Simon Curtis's My Week with Marilyn (2011), alongside a stellar cast of Oscar nominees including Michelle Williams as Marilyn Monroe and Kenneth Branagh as Sir Laurence Olivier, in addition to Eddie Redmayne, Dame Judi Dench, Dougray Scott, Zoe Wanamaker, Toby Jones and Dominic Cooper. Chronicling a week in Marilyn Monroe's life, the film featured Emma in the supporting role of Lucy, a costume assistant to Colin Clark (Redmayne). The film was released by The Weinstein Company and was nominated for a Golden Globe for Best Motion Picture - Comedy or Musical. In 2012 Emma was seen in Stephen Chbosky's adaptation of his coming-of-age novel The Perks of Being a Wallflower (2012), starring opposite Logan Lerman and Ezra Miller. This independent drama centered around Charlie (Lerman), an introverted freshman who is taken under the wings of two seniors (Watson and Miller) who welcome him to the real world. The film premiered at the 2012 Toronto International Film Festival and received rave reviews. The film won the People's Choice Award for Favourite Dramatic Movie and Emma also picked up the People's Choice Award for Favourite Dramatic Movie Actress. Emma was awarded a second time for this role with the Best Supporting Actress Award at the San Diego Film Critics Society Awards where the film also won the Best Ensemble Performance Award. In summer 2013, Emma starred in Sofia Coppola's American satirical black comedy crime film, The Bling Ring (2013), opposite Katie Chang and Israel Broussard. The film took inspiration from real events and followed a group of teenagers who, obsessed with fashion and fame, burgled the homes of celebrities in Los Angeles. The film opened the Un Certain Regard section of the 2013 Cannes Film Festival. Emma also appeared in a cameo role as herself in Seth Rogen's apocalypse comedy This Is The End (2013). The film tells the story about what happens to some of Hollywood's best loved celebrities when the apocalypse strikes during a party at James Franco's house. In 2014, Emma was seen in Darren Aronofsky's Noah (2014), opposite Russell Crowe, Jennifer Connelly, Ray Winstone, Douglas Booth, Logan Lerman, and Anthony Hopkins. The film told the epic, biblical tale of Noah and the ark. Emma plays the role of Ila, a young woman who develops a close relationship with Noah's son, Shem (Booth). Noah made an outstanding $300m since its release in March. In 2015, Emma starred in Regression (2015), written and directed by Alejandro Amenábar. Also headlined by Oscar-nominated Ethan Hawke, and set in Minnesota in 1990, Regression tells the story of Detective Bruce Kenner (Hawke), who investigates the case of young Angela, played by Emma, who accuses her father of sexual abuse. In 2012, Emma was honored with the Calvin Klein Emerging Star Award at the ELLE Women in Hollywood Awards. In 2013, Emma was awarded the Trailblazer Award at the MTV Movie Awards in April and was honored with the GQ Woman of the Year Award at the GQ Awards in September. Further to her acting career, Emma is a Goodwill Ambassador for the UN, promoting gender equality and the empowerment of women. Emma graduated from Brown University in May 2014. In 2017, Emma starred in the live-action Disney fantasy Beauty and the Beast (2017), one of the biggest movies of all time in the U.S., and the dramatic thriller The Circle (2017).